Having read up about Making Peace with Food, I have embarked this week on the workbook reading and exercises, which I found easier to follow than the main book. Particularly the explanation around habituation where dieting stops us from having the effect of being comfortable around some foods which can result in bingeing. It was also interesting to learn that dieting can increase the stress response by triggering our bodies to make more cortisol, the stress hormone (Tomiyama et al. 2010) which for some can lead to more eating or other habits to try and relieve stress.

The exercises included asking some thought provoking questions around our eating history, fears of allowing ourselves free rein and, for me, what foods do I currently forbid or restrict? My first thought around this was ´I don´t actually forbid any food right now´ (bearing in mind I have done many diets in my life from Atkins, Weightwatchers to Intermittent Fasting). But on closer reflection I realised whilst I don´t have any forbidden foods I do have some unconscious rules around some foods especially chocolate and desserts. I will only allowing myself a certain amount of either of these, but also have almost a sense of entitlement that I deserve some kind of ´treat´on a fairly regular basis, regardless of whether I feel like it or not!

I also restrict gluten, but that is because I know it makes me uncomfortable and bloated. I do allow myself to eat it, but know that if I have ´too much´ it is not worth it. I am also slowly starting to realise that my limit is less than I realise, especially if accompanied by cheese (sadly another favourite food!)

This last week we have had a few days away including camping which I was a little apprehensive about as it often ends in eating more bread-like stuff, as it is convenient. It did end up a bit like that, but I also took some other snacks which reduced my intake, but still I ate more than I felt comfortable with, but I am learning. We also had guests staying for a few days which inevitably leads to more eating out, more availalbility of treats to sample local cuisine e.g. churros, etc. I didn´t stop myself from having anything, but realised that I didn´t need as much as I would normally eat, plus severely cut down on bread.

We are invited in the workbook to go through each limited or restricted item to allow ourselves to eat them and then take notes from our experience. My observations have been that whilst I generally enjoy allowing myself chocolate, for example, it still leads to me wanting more and more. Whether this is a reaction to just liking it, craving more energy, or a knee jerk response to a sense of restriction, I have yet to decipher. It does make me want to not even have it sometimes as I know that the desire is then very strong to continue eating, but maybe I just need to do that and see what happens which is kind of what Intuitive Eating is all about. I think I am a way of from being habituated around chocolate and many sweet things. The next few days I am going to revist the questions and worksheets around eating these items in particular and how my experience was and will report back. We have some meals out and our daughter´s 13th Birthday party in the coming days, so I am sure I will get plenty of opportunities to test this out!

The past week has not been a usual week, mainly that I haven´t felt that well for several days which always tends to lead to me eating erratically and less healthily (despite me knowing that I need the opposite!) in an attempt to get more energy inside me. But I am trying not to sweat over it, although it is hard at times especially as I am not doing the exercise I have been the last 6 weeks. I know I have been less in tune with my body and more with my mind as I seek comfort food to help me feel better. However, I also haven´t gone mad and have rested and also taken in more vitamins than I would do usually.

The chocolate thing is still something I want to get more habituated by and have allowed it whenever I feel like it. I realise now that is not just going to pass in a few weeks, it will be ongoing. I have read in some of the IE Facebook groups I have been in for some time, that some people binge for months on end on things they have not allowed themselves at all. This sounded pretty scary to me when I first read about it, in terms of health and putting on weight (which I have yet to let go of an attachment to, I know). I don´t feel like I am doing a full scale binge, but I do know once I start eating chocolate, I find it hard to stop. But I am also increasingly asking myself what I really need in that moment and sometimes I feel it is chocolate, but after eating it I usually realise it is not that. I could really do with a nap or some physical or mental comforting instead like a lovely bath or to journal (but they don´t spring to mind like chocolate does – yet!)

I have also noticed again that when I have eaten pizza or a lot of sugar I feel uncomfortable in the middle of the night with a stomach ache and bloating. I will need to decide whether it is worth it next time I feel like eating either one of them!

I have felt the strong desire to weigh myself as I am partly curious and partly wondering if I have lost any weight or put it all back on to where I started. Yet again, I know that doing this will not help me and will most likely lead to me punishing myself through thought and then lead to some kind of food comforting. But it is hard to let go of the numbers on a scale or how you feel in your clothes. I am not sure I will ever let go of the desire to feel more comfortable in my body, but I want to move to be more appreciative and in tune with it, which I feel in my heart will inevitably lead to some weight loss and being fitter and more toned. It is hard to be really honest about whether it is all about being thinner or a combination of factors. For now, I am working on being more connected to my body than punishing it or myself, which can only be a good thing.

This is all an evolutionary process, I know. It is quite frustrating to someone like me who wants to just tick the box and move on, but I also know that I will only really be integrating this if I am patient and keep going. I may not be ´done´with making peace with food, but I am still on the right path and feel ready to continue to Principle Four – Channel the Food Police, which I think will helpfully build on this principle.

What do you think about your relationship with food – are there any foods that you feel you need to make peace with? How connected are you to your body and its´ messages and needs? Do you find any changes when you are unwell or going through a stressful or tough time? As ever, I would LOVE to hear from you in the comments below…….. 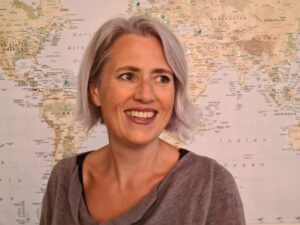